ANIMAL FARM is surely the greatest political fable ever created and one that is never more relevant than in the present world, where our liberties are falling under the shadow of populism and dictatorship.

The direct historical background of the story might no longer exist, but the power structures described by Orwell are an intricate part of human nature.

One sees oneself reflected in the emotions, goals and desires of the animals depicted and can clearly hear the ghost of Charles Darwin preaching his theory of evolution.

But ANIMAL FARM is also a wonderful story in its own right, an entertainment of the first order that combines humour with exciting action and heart breaking tragedy.

George Orwell knew from bitter personal experience in the Spanish Civil War that hope is not enough, that in dreaming of Utopia we can create a Hell on Earth.

But he also knew that without hope and optimism we are animals, condemned to be dominated by the strongest and fiercest.

The characters of ANIMAL FARM have become legend: Boxer the heroic and betrayed horse, Napoleon the scheming pig and a host of dogs, sheep and pigs who end up under the most terrifying slogan in modern literature:

ANIMAL FARM calls on the reader to imagine talking animals. Staging or filming the book removes this imaginative collaboration. As soon as we dress up an actor as a chicken there can be no pathos and little politics, only laughter. How does” four legs good two legs bad” translate into a realist portrayal of animals by (two legged) actors? 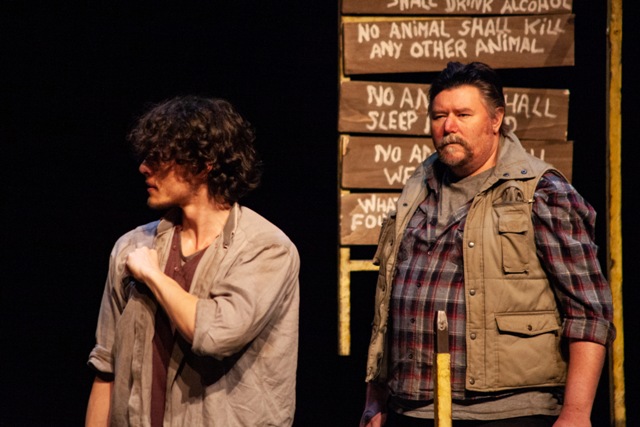 We have attempted to solve this problem by allowing the audience to react as the reader, to imaginatively collaborate with the artist. And (a nod to Brecht) to allow the actor to demonstrate an animal without trying to be one.

Our migrant workers, without permits are the victims of both economics and politics. We all know they are everywhere, but we look away. So here we place them on stage where we cannot look away and allow them and our own imaginations to create ANIMAL FARM, perhaps as Orwell intended… 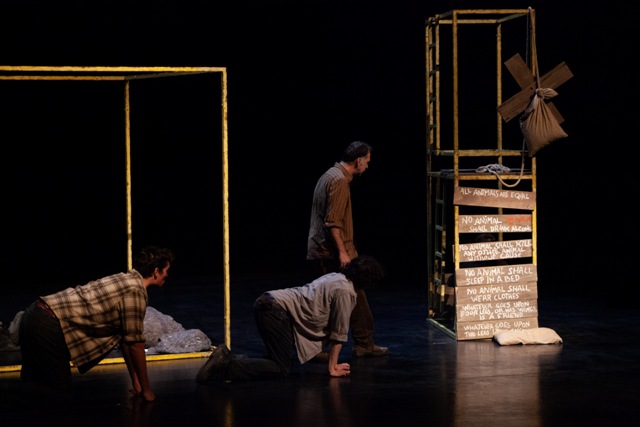 TNT theatre’s aim has always been to combine the popular with the original, to allow the audience to laugh and cry. ANIMAL FARM is an ideal story for the company to illuminate with our blend of physical theatre, music and sensitive analysis of text.

We are confronted by animals, see and hear their sounds and movements on stage. But we are never made to feel that this is a children´s story, but are immediately fascinated by the timelessness of this production.

We are made aware of our strengths and weaknesses and somehow sense that we, too, can be cajoled into accepting conditions in the name of sacrifice which we would normally consider to be far below our standards.

Are we capable of allowing ourselves to be enslaved by others? At least in an emotional sense, yes. Could we find ourselves so passionately involved in a cause that we could convince others at almost all cost to join us?